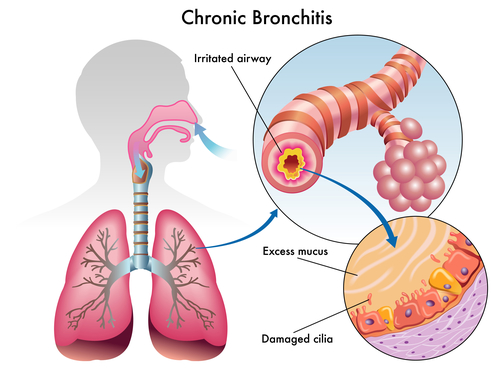 An Overview of COPD

Chronic Obstructive Pulmonary Disease (COPD) is a group of progressive inflammatory diseases which makes it difficult for the afflicted person to breathe. These diseases cause airflow blockage in the lungs. Examples of such diseases are:

According to the World Health Organization, by 2030 COPD will be the third leading factor of death in the world.

Common symptoms of COPD are:

The Connection between Smoking and COPD

One of the leading causes of COPD is smoking. Smoking also triggers attacks known as exacerbations or flare-ups in COPD where all the aforementioned symptoms become more pronounced. Smoking causes damage to the lungs by degrading the elastic walls between air sacs and stiffening the air sacs, inflammation of air ways, obstructing the airways by excess mucus. Tobacco smoke is the greatest risk factor for developing COPD. People who smoke both marijuana and tobacco are at a greater risk of developing this chronic disease. Chances of becoming afflicted with COPD increase with the amount of tobacco smoked per day as well as the number of years of persistent smoking. Sometimes, people who are passive smokers also develop COPD flare-ups.

No cure of COPD has been discovered yet but taking precautionary measures alleviate the symptoms greatly and prevent further degradation of lungs. The first step to treat COPD in smokers is to quit smoking entirely. Quitting this injurious habit will slow down the progression of the disease and make the quality of life better, so it is never too late to stop smoking.

It may seem as if smoking is an everlasting habit but presently there are certain treatments that are proving to be worthwhile at helping people to quit smoking. Some of these are:

Common Health Issues During The Winter