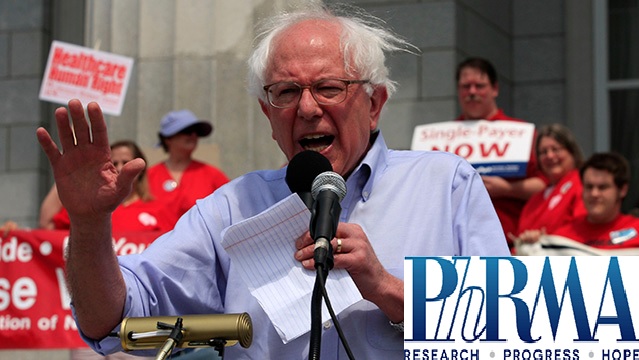 Bernie Sanders is the government of Vermont and is in the running election from US president in 2016. One of Sander’s main concerns is the Great American Drug Heist. Big PhRMA is a prescription drug company that is part of the reason why America is paying the highest price for prescription drugs in the world. Bernie Sanders wants to put an end to big pharmaceutical companies like Big PhRMA robbing us out of money. Here is what he has to say.

When drug companies are researching drugs, our taxpayer money supports most of the research for developing the drugs. In 2014, drug costs have increased 11% and have doubled in the overall rise of medical costs. “One in five Americans, Sanders noted, don’t fill a prescription because of its cost. Lives are lost because drugs are too expensive.”

In 2013, America spent 40% more on prescriptions than Canada. And Canada is he an industrial country and has the second most expensive drugs. The cost of drugs was 5 times per person than people in Denmark. The ratio is when a citizen in Denmark spends $20 on drugs, an American spends $100.

Sanders said, “Our drug costs are out of control because that’s the way the pharmaceutical companies want it. Other countries have national health insurance like the Medicare For All plan I have proposed, and these national plans are able to negotiate better prices. In this country, however, drug lobbyists have been able to block Medicare from negotiating better prices on behalf of the American people.”

Congress was among the people who voted to prohibit Medicare from having bulk discounts on prescriptions. The prescription bill was put into effect in 2002 by the Bush administration. But in 2002, the drug administration contributed almost $30 million in the 2002 election cycle and to three-fourths of the Republicans who controlled the Congress and White House. One of the people, Billy Tauzin was the chair of The House Committee that wrote the bill and the ban, is now the head of PhRMA and makes $2 million a year.

Sanders has created a detailed five-point program. This program will stop the drug companies from ripping of Americans.

1. First one is ending the ban on negotiation bulk discounts for seniors.

2. It should be easier to order drugs online through Canada, which has lower prescription costs.

3. Strip drug companies of patent protection which will crack down on their fraud.

4. “Pay for Delay” is ended. This is when drug companies pay others to wait on coming out with a generic for lower cost.

5. Bring to light and make it more known that taxpayers are paying for most of the research and development of drugs.

The Great American Drug heist is the definition of corrupted politics. It is never good when big drug companies are donating and supporting to people in government who hold high power. And this ‘rip-off’ has lasted over a decade.